At the moment, India is the ICC Cricket World Cup Champion defending its title in the 2015 edition. As I write, India has started off the defense campaign by a win over Pakistan. Online media, social networks and messengers are loaded with anecdotes, videos, game analysis, predictions and player trivia.

Indians are passionate about two things – Cricket and Bollywood. I have grown up on other sports in India too – tennis and football (soccer). But when it comes to the World Cup of cricket, other sports take a backseat. This will be the first time in 20 years, Indian cricket team will be playing without Sachin Tendulkar. He had been a regular figure in last 5 world cups, garnering maximum accolades to the team.

Over the years, the data visualization aspect of the game has improved. Nowadays, a cricket match analysis is replete with infographics and tools like wagon wheel, projection deliveries, momentum, hawk-eye, snickometer, etc.

There are multiple cameras that capture the action on the pitch and ground through different angles and get the granular data. From the sports data scientists’ point of view, the golden age of sports data (or rather cricketing data) is about to come. We now hear about the video analytics tools deployed by respective cricket teams to gauge the weakness and strengths of players.

Four years ago, I worked on two concepts related to cricket. One is the cricket scorecard and second is an iPad application.

I wanted to change the way cricket scorecards were presented to the users on television and websites. I wanted to give a new feel to it. This was my humble creation as I was just entering into the world of infographics design. Now, I look back and wonder at these designs and think they can be designed better :). 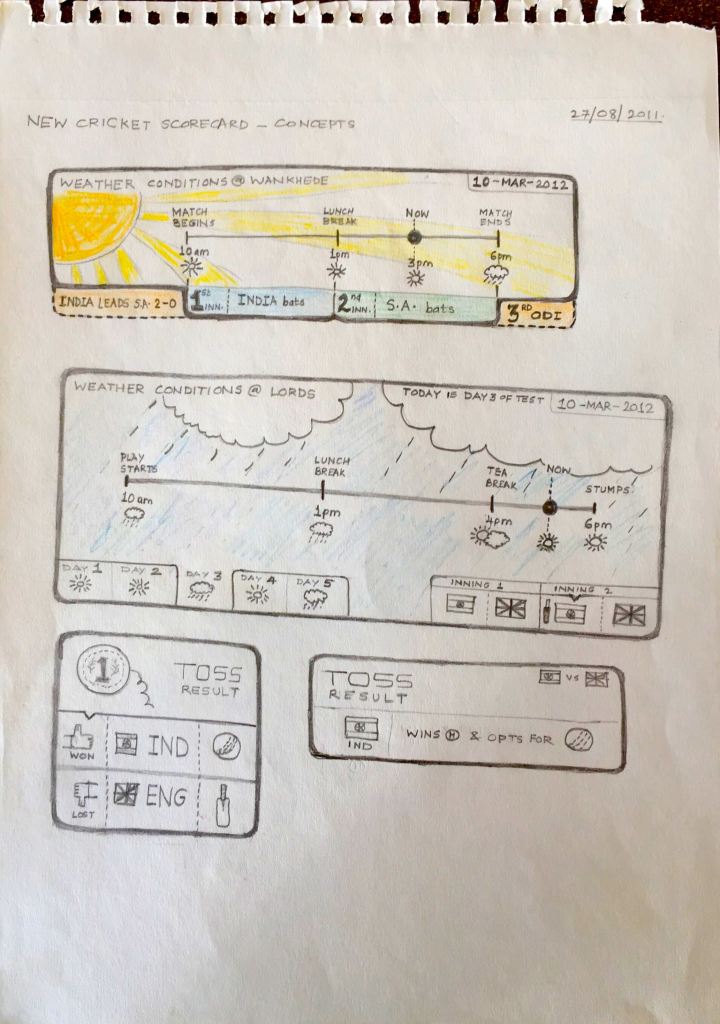 The second concept I did was a Twitter based cricket application called “IndiTalk!”. The premise is simple – talk, talk and talk about cricket. iPad was just launched, back then. The app UI bears good resemblance to the first generation iPad apps. This app, if designed today will probably have a different character to it.